It is my outstanding pleasure and privilege to translate THE TRIALS (DIE PROZESSE), the newest text by British playwright Dawn King. The play is a commission by the Düsseldorfer Schauspielhaus, its world premiere is scheduled for 04 June 2021 at the Bürgerbühne Düsseldorf.

In a not too distant future, a jury of children and teenagers are to decide over the fate of the generations of their parents. The climate catastrophe has happened, the ressources of an overheating earth will not suffice for its too many human inhabitants. With the trials, the former generation is judged by the future one for its responsibility for this catastrophe, the guilty ones are executed: fewer mouths to feed.

With her great success FOXFINDER (finalist of the Suzan Smith Blackburn Prize 2013/14) and her play CHIFFREN, King is already a name even on German stages.

Directed by Adrian Figueroa, designed by Irina Schicketanz, and with a large cast of 15 characters, the production is certainly something to look forward to.

The rehearsals are in their final stage, the batteries of the tablet computers are being charged so that everything will be ready for the opening of DIE MASCHINE IN MIR (VERSION 1.0) at the Burgtheater on New Year’s Eve. You can already find a trailer here: 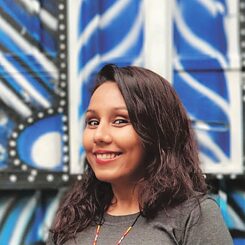 With her play PHANTASMAGORIA, south Indian playwright Deepika Arwind sheds a light on the shift to the right in Indian politics since 2014. At that time, a nationalist religious party took the lead, spreading a political climate of fear ever since. Threats and other forms of discrimination against Muslims, for example, dominate the (dis)course pushed aggressively by the media.

In the play, an established journalist invites to political opponents to an independently organized public debate to reestablish the political dialogue beyond aggressive and populist tones in the media. We follow the two women during the one hour they spend, together with two other characters, in a room preparing for the talk. While the encounter is respectful and reserved at first, the situation in the arena outside grows increasingly out of control, and the exchange between the two political actresses becomes ever more manipulative, tense and threatening.

Even though the play is set in India, it avoids references to existing places, parties, names in order to reflect on the shift to the right in politics worldwide that we have been witnessing for years which allows for transfers to other contexts.

The dense text with its strong characters will be presented in April 2021 during the GLOBAL Festival of the independent Munich Teamtheater Tankstelle, together with other plays from Bavaria’s partner region Karnataka in India. The translation from English into German is being completed by Bochert Translationsa and is supported by the Indian Embassy in Berlin and the Indian Councili for Cultural Relations (ICCR).

After a lot of time (thanks, Corona) for meticulous polishing, after a wonderful lectorate (thank you, Rowohlt), the beautiful text by Eve Leigh is now available in German from Rowohlt Theater. I am very much looking forward to see it produced!

In June 2020, an initiative of 300 theatermakers in the U. S. published a statement adressing the “White American Theater” and quoting August Wilson’s historical 1996 speech. For publication of the statement in the July 2020 edition of the Theater heute magazine, Bochert Translations translated this statement into German.

A lonely voice sleepless in front of the Internet, at night. New tab – a man in the bathtub. New tab – a young woman inside a watertank. New tab – a girl on the tracks.

Eve Leigh’s dream – or nightmare – about the solitude of pain, about digital bodies as (questionable) freedom from one’s own limited body, about handicaps, accessibility, force and personal freedom, premiered at the Royal Court Theatre in London in November/December 2019.

The required translations from Macedonian, Portuguese, or from German into English are provided by Bochert Translations.

Since last year’s edition, the international theater festival Theaterformen runs a blog with an editorial team of its own to accompany the festival with thematic and critical contributions. The articles are composed, among other languages, in German, Arabic, or French.

The translations into and from these languages are provided by Bochert Translations.

From 08-18 June, the annual theatre festival THEATERFORMEN took place in Hannover. Productions from Belgium, South Africa, Slovenia, Sweden, the U.S.A., Mexico, France, Italy, and other countries were invited. This year, the festival direction decided to not only offer magazines and material about the plays, but also to run a festival blog  for bloggers to describe and announce festival contributions and events and publish interviews in various languages.

The translations for this blog were accomplished by Bochert Translations.

During her residency in Berlin, US playwright Andrea Stolowitz and Henning Bochert discussed their respective theatre realities. Now their conversation on aesthetics in playwriting has been published on Howlround. A slightly longer version (and its German translation) can be found here.